To be honest, I have been to Ningbo many times but I really don't know that there is such a place called Xiao Putuo, so after going to the North and South Lakes, I cross the sea bridge again to Ningbo and reach Xiao Putuo in Dongqian Lake.

Xiao Putuo, also known as Xiayu Scenic Area, has a Guanyin on the water next to it, with the lake as the lotus platform and the green hills as the background, as if looking down at all beings with kind eyes. This statue is 10 meters high, and the whole body is carved with snowflake white stone, which has become a striking landscape in Xiayu. Xiayu has a famous "Bu Tuodong", a Buddhist grotto carved in the middle of the Southern Song Dynasty. The four characters "Bu Tuo Dong Tian" on the grottoes are inscribed in the Southern Song Dynasty. Bu Tuo, Putuo, and Potala are all transliteration in ancient Sanskrit, meaning "beautiful little white flowers", which is synonymous with Guanyin preaching field. Xiayu Temple has been built beside the grotto since the Song Dynasty, and it was rebuilt as an open place for religion in 1995. 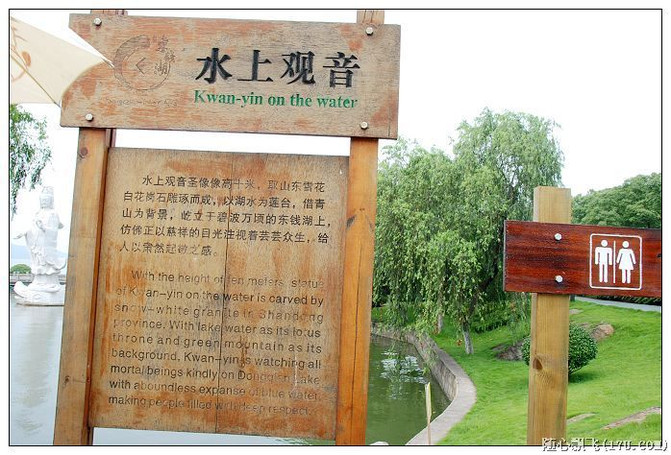 Crossing a smooth and wide road, the two cases are weeping willows, a beautiful scenery of the south of the river. There are also some pavilions built by the lake for tourists to live in, which are very pleasant leisure places.

Sitting by the lake, watching the lake light, listening to friends muttering, people can't help but want to stay in a hurry.

It is said that there were Xiayu Temple, Guanyin Cave, Wanghu Pavilion, etc. in the Southern Song Dynasty, which has a history of 800 years.

To be honest, I always stay away from the temples. The scenic spots in the south of the river are really only suitable for leisure. It is best that three or five friends can drink tea and talk about their heart. Otherwise, it looks really similar.

On the 19th floor, the Opel Hotel overlooks the entire city of Ningbo, but it still has a certain impact.