I remember there was a text in the elementary school, "Guilin Landscape is the Best in the World." I have been yearning for it, but I have a lot of holiday arrangements every year. . Until this spring, there was no special place to look at, so go to the Lijiang River. During May Day, there were crowds of people. When I went there, I was watching the crowd, so we won't go there. The estimated number of people in the following week was a good time. Now that it's decided, go ahead. First booked a train ticket from Nanjing to Guilin on May 6 and a return on the 10th, and then booked a trip to the Lijiang River for 350 yuan per person on Ctrip.com, including a foreign affairs boat ticket (including lunch on board), and arrived at the hotel in the morning. Pick-up, pick it up from Yangshuo at night and send it to the hotel. Then Ctrip.com will book May 9 Xiangbi Mountain + Night Tour of Two Rivers and Four Lakes for 208 yuan per person.

On the morning of the 6th, I called Ctrip to make a reservation for the day trip to the Da Li River on the 8th. It is very important that the previous reservation is not scheduled. After dinner, prepare to prepare, board the westbound bus, woke up as soon as possible, have passed Nanchang, asked the trainer halfway that the train was estimated to be late, and hurriedly called the hotel. It is not expected to arrive at 18:00, and asked to stay until 19:00, finally After 20 hours, arrived at Guilin Station at 17:51 and 20 minutes later. After getting off the bus, according to the previous homework, go straight across the road after leaving the station, and you will see Home Inn (Train Station Store), drop your luggage, wash away the tiredness of the day and night, and then go out the hotel door to the road and take two traffic lights on the right hand. Turn right another 100 meters. There are a lot of people at Tsing Kee Roasted Goose Shop. I asked the receptionist that there were no seats. There were two tables under the eaves of the outer porch. One of the guests had to leave. Sit down quickly. O (∩_∩) Oha !! I caught up with the turnaround, it was really cool outside, the weather was not cold or hot, the air was refreshing, and a rare good seat, even if I let in, I did n’t. After taking the menu, a quarter of the signature Cai Teng Kee Roasted Goose, and another fried goose intestine, plus two cups of wild mountain mushroom soup, more than a hundred, two people are very happy, the fried goose intestine is a bit spicy, burn The goose did not say that, outer Giorinen, praise one! At 8 am on the 8th, the tour guide arrived as scheduled, boarded the bus and picked up at all hotels, and went straight to Zhujiang Wharf. During the drive, the tour guide Gan Dog Meat (Guilin's friend called dog meat) introduced today's itinerary. Bilingual tour guide, English is awesome, especially mention that you can go to Yulong River for rafting. Originally, LP and I wanted to go drifting in the Yulong River, but checked the weather forecast before departure and said that it was raining in Guilin. It was estimated that it would not float. I did not expect that it was only rainy today, so I decided to follow the tour guide, 150 yuan / person . The Da Li River cruise ship has two docks, one is an ordinary ship, boarding at Mopanshan Wharf, one is a foreign affairs ship, and boarding at Zhujiang Wharf. It is said that the foreign affairs boat is better, so we will order the foreign affairs boat, which has three points on board One of them is a foreigner, a big bag, a daughter-in-law, that is a lively one. The boat sailed at 9:30, and the sales meeting also started. From the first minute of the sailing, the big horns started to sell some fresh Lijiang aquatic products. The fish cost several hundred yuan a catty, and the fried small hairy fish was a small dish of 40 yuan, even outside. The wrapped egg flour is estimated to be two or two, and then it is perfume and DVD. It is too busy to be busy. This is too commercial. Last night, although there were many soliciting and selling beautiful women on the roadside. However, it was on the street. I didn't feel anything. Today we spent 350 oceans and listened for a few hours on the boat, it was annoying. Zhujiang Wharf to Yangdi is the first section of the Lijiang River scenery. The scenery along the way is okay. The weather is not very good, it is gloomy, and occasionally there is a light rain. 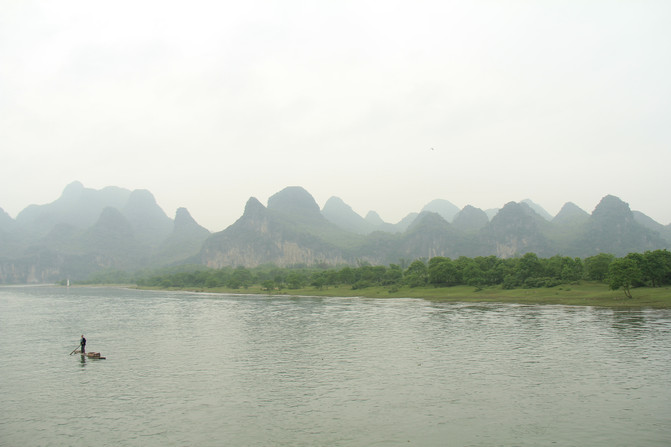 Began the real Lijiang River essence scenic section, Jiuma Painting Mountain and the background map of 20 yuan are in this section. After passing the Xingping boat, there are several scenic spots such as Wuzhishan and Luoyingshan, and then you can sleep.

Nine horses draw mountains, I can only see two horses

The lunch on board is a buffet, the expectations cannot be too high, the portion is enough to fill up, and the front is lightened and the dishes are added. 13:30 Boat to Yangshuo

Row by row, one by one, ascended the pier and walked along the road for a few minutes to the famous West Street. I felt that there was nothing worthy of praise. The hundreds of meters of street were full of strong commercial flavor and no interest in shopping. And went to the parking lot

Sure enough, it is the off-season after May 1 and there are very few tourists. Unlike the fake bamboo rafts made of PVC pipes on the Li River, this is a bamboo raft made of real bamboo. Two people lie in the green river water under the bridge. a painting

View Yulong Bridge from the river

I watched the fishing show again. It ’s so pitiful that I caught a fish with a straight and long neck, standing tall and constantly swallowing, but the rope around the neck made it impossible to swallow it. The fisherman squeezed the fish out

The bamboo boater and the wood pulp carried us down the water slowly. The original scenery around the Yulong River gives a very peaceful feeling. Several couples are taking wedding photos here.

The two crushes asked me to take a picture of them. The technique is not good. Forgive me.

The elder brother who was rafting was very friendly. He reached the U-turn point, turned the bow, and returned to the same way. He landed at Yulong Bridge, stepped on the bus back to Guilin, and went straight to the hotel. The service was really good.

I ca n’t eat roasted geese this time. I switched to Jinlongzhai to eat beer fish. I ordered a beer fish made of sword bone fish, a bean curd pot, and a tomato egg soup, more than a hundred. The fish is not as delicious as expected, very average, isn't the sword bone fish bad, please ask the children's shoes of Guilin

On the morning of the 9th, I slept a little, packed up, and left my backpack at the hotel after check-out, and went to Elephant Trunk Hill Park. The Ctrip ticket collection location is on the left-hand side of Wenchang Bridge walking 100 meters east along Binjiang Road. It's easy to find. After opening the ticket exchange ticket, go a little further and go to Gate 2 of Xiangshan Park. Go in and see the famous elephant trunk mountain

Remember to go around Houshan to see Xiangshan Shuiyue, otherwise I'm sorry for the money

If you are not old and weak, you can also climb the mountain. There is a Elephant Eye Rock in the middle, which is a cave in the middle of the Xiangshan.

To the top of the mountain overlooking Wenchang Bridge

Take a break at the door after going down to prepare for dinner. The cruise ship pier for two rivers and four lakes at night is next to Wenchang Bridge. There is a restaurant called Xinhuating Restaurant next door. I went upstairs and asked for Cambridge bones, vinegar and shredded potato, plus a loofah soup. There is no loofah on the menu. Soup, I asked the waiter what I could do. I made a taste of the loofah that the boss could n’t eat. The Cambridge bones were good. It was very appetizing for carnivores. LP is a herbivore. Just potato shreds. In my early days, the raw loofah soup cost 25 oceans, and I do n’t know if it ’s a bargain on the menu, it ’s dark!

After dinner, go down the left hand wall and walk 50 meters to the pier. After a while, the boat comes on board and starts the night tour. This tour was done with the boat and made three trips in two days. The back deck of the ship was used for tourists to take pictures. One of the crew on the ship occupied half of the area and said that it was free to take pictures of tourists. The final cost was 30 yuan. The end of the one-and-a-half-hour night tour felt that the scenery was average and the cost performance was not high. The crew kept yelling at tourists and let him make money.

The disembarkation was at Jiefangqiao Pier. I took a taxi to the railway station hotel for 12 yuan, picked up the package and just caught the train back to Nanjing. I finally left Guilin, full of commercial atmosphere.