There are beautiful landscapes here,

There are nourishing hot springs here,

There are peaceful bays here,

There are countless memorable foods here.

Nature gave her a peerless look hidden among the mountains and forests.

One and a half hours by high-speed rail from Hangzhou,

Quickly keep up with me and lift her veil. 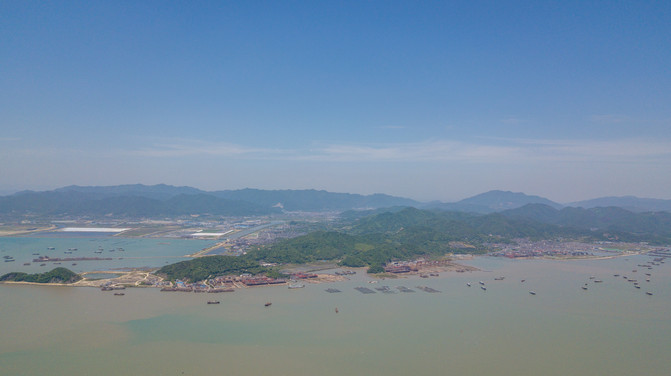 Two: Three days and two nights, should Ninghai play like this?

Ninghai, a county under the jurisdiction of Ningbo, is located in the middle of the coastline of mainland China. The tourist resources here are rich, the environment is beautiful, and the climate is comfortable. This is also the beginning of "Xu Xia Ke Travels". 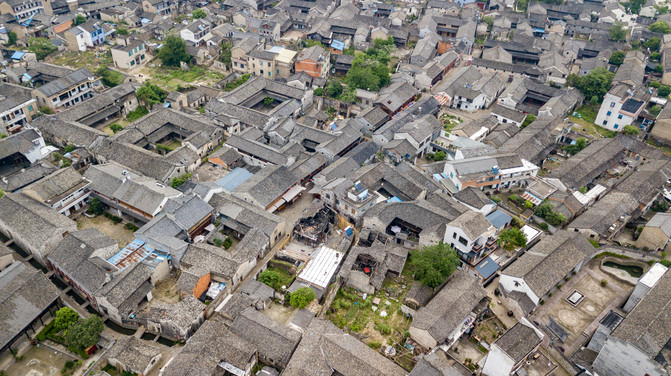 Three: Fun with these points in Ninghai, prove that you have been Shili Hongzhuang Cultural Garden uses bamboo, wood, stone, soil, and metal as the main building materials, plus the landscape elements that are inherent in the south of the Yangtze River. It is in line with Ninghai's artistic conception of "beneficial mountains and mountains and mountains and rivers." The work of Wang Puzhi, winner of the Pritzker Architecture Prize.

Shili Hongzhuang Cultural Park has collected many items related to wedding customs, and the nine exhibition halls set up have made me truly appreciate the local folk culture. They are red makeup, wedding, makeup, red hairpin, couch, female red, intangible heritage, seat, and wedding book. Visitors can browse and visit in this order.

When he came to the exhibition hall, he was attracted by its Wangong sedan, which is the treasure of the town hall of Shili Hongzhuang Cultural Park. In ancient times, a worker did one job a day, and this sedan car cost tens of thousands of workers.

Wangong sedan is decorated with wooden carvings, lacquered lacquer, and gold foil decals. Especially the 250 characters on the sedan are even more lifelike. I seem to see the gleaming glitter of Wangong sedan under the sun, like a miniature royal palace.

Next to it is a marriage team of 200 people made of mud, which truly reproduces the local wedding ceremony.

Dongfanghuazhu · Hongyao, one of the four great joys of life, is the place where countless newlyweds look forward to. Not only did I see the ancient mysterious cave houses here, but I also restored my daughter's boudoir to my heart.

Women's pursuit of clothes has begun since ancient times. The female red in Hall No. 6 let me see the trendy clothing and fine embroidery of that era, and I had to admire the ancient embroidery skills.

The inheritance and non-heritage of the Shexiang Township, in front of my eyes are the red makeup wedding custom of Ninghai Shili and the lacquered gold paint of Ninghai, as well as the common props in the former Lantern Festival. Through the display of the original, I was brought into the real scene, and there was a feeling of crossing.

Hundred years of marriage and marriage, these marriage books are equivalent to the current marriage certificate. I saw paper carving stories, love letter displays, and wedding letter displays here. The biggest impression is that it is too exquisite. If modern society can still get such a beautiful The wedding book must be very valuable.

The Shili Hongzhuang Cultural Park is not only rich in connotations, but the entire cultural park is full of local charm.

I once saw a film and television work called "Hairdresser". I still remember that it was shot in Qiantong Ancient Town of Ninghai County. At that time, I was attracted by the scenery of the ancient town.

Seeing the gates of Qiantong Ancient Town, I have a familiar feeling, as if going to a date with an old friend.

The pale blue tiles and pink-white walls gave me a poetic sense of Jiangnan at first sight. I couldn't help but speed up and walk forward, thinking to myself what surprise this ancient town hidden in Qiantong Town, Ninghai will bring me.

Walking on the stone road in the ancient town is as comfortable as walking on the massage road. The quiet path is lined with quaint houses, and the mottled wall tells the past glory. The flowing sound of the small bridge makes a pleasant sound, which breaks the quiet picture and brings a sense of beauty.

The red lanterns hung on the vicissitudes of the wall, forming a sharp contrast, as if they were engaged in a dialogue across time and space, and I accidentally became their loyal audience.

Walking in the ancient town, the long alleys matched with the dark sky, let me have an illusion, as if walking into the rain lane of Dai Wangshu. The flowers and trees inadvertently appearing along the road brought vitality to this ancient alley, which broke my illusion.

At this moment, the leisurely people in Guzhen, like me, have reduced their activities, sitting quietly at the door, watching the mobile phone, and accompany Guzhen into their dreamland.

When I was wandering in the ancient town, I always thought about who has the vision to build an ancient town like a paradise here. The original ancestor was Di Gonglang Tonghuang in the Southern Song Dynasty.

This is the most ancient town in eastern Zhejiang with Confucian culture. There were 202 people who were honored with talents in the Ming and Qing dynasties. There are more than 400 people including professors, doctors, and international students in modern and contemporary times.

I used to see the Longmen Grottoes in Luoyang, and saw more Mogao Grottoes in Gansu. But what made me even more surprised was that the abandoned mine pits after mining in Ninghai have now become famous tourist attractions.

The Wushan Grottoes are located on the shore of Sanmen Bay on the coast of the East China Sea, including the Smart Mountain Scenic Area and the Bu Zhoushan Scenic Area. The water transportation of Wushan Grottoes on the tidal flat is very developed, and the mined stones can be directly transported to all parts of the country by water transportation. This is also the reason why local quarrying is popular. After hundreds of years of excavation in Song, Yuan, Ming and Qing dynasties, more than 30 grotto groups were formed, and more than 800 caves of various shapes were formed.

People who quarried that year thought that the stones would become very hard as soon as they saw light and water, so they used their brains to think of a good way to quarry from the top of the mountain with a shaft. This has caused the landscape of the grotto gardens. Inside the grottoes, water accumulates into ponds, some of which are extremely clear, and some are unpredictable. After the vicissitudes of the world, wind and birds and beasts brought seeds into the cave, forming wild flowers and trees in the grotto.

The biggest impression in the scenic area is that it is majestic. The mountain walls here are neatly cut like a knife, and the ground is full of green grass. The gap between the cliffs is covered with lush flowers and trees. .

The first spot in the scenic area is the cliff carvings, and the four red characters "Changting nostalgia" are strong and powerful. A white training waterfall flew from the jungle next to it. The torrent of water hitting the rocks on the ground caused white waves, and the beauty of the mountains and the water was beautiful.

Entering the Smart Mountain Scenic Area, at the "Xu Huai Ruo Valley", you can see the stones everywhere, and various flowers and trees surround the stones, which is full of softness.
Strolling in the scenic area, the fresh air pours in from all directions, refreshing. Like this fresh air, there are all kinds of stone carvings everywhere. The scenic area uses abandoned mine pits to sculpt a variety of animals, each one is vivid.

The biggest difference between Wushan Grottoes and Stalactite Grottoes is that these grottoes are all ventilated, not as dark, dull and humid as Stalactite Grottoes. What makes me most comfortable is the temperature here. It is kept at 22 ℃ all year round, and it is very cool to walk in the cave, so it is best to visit here in summer.

Some of these caves are shaped like giant bell tops like covered pots, and their walls are like barrels; others are shaped like ancient military tents, long cliffs, and caves stacked on top of each other, communicating from side to side, with caves connected, caves strange, and twisting loops. , Inscrutable. Touring here is like adventure, no one knows what surprises will appear on the next turn!

The grotto is vertical from the ground or in the cave, with a depth of 10 to 100 meters and a diameter of 10 to 30 meters at the bottom. How much manpower and material resources should it take to quarry in such a huge grotto? What's more, there was no large machinery in ancient times.
There are many patterns engraved on the rock wall of Bichi Kongshan. There are lifelike animals, various patterns, and the empty grottoes and clear water of wooden bridges make me feel full of ethereal mood.

The clever landscape was the location of the "Dragon of the Dragon" that year, and when the scene of the TV series appeared in front of me, I still had an indescribable shock.

The water quality in Lingyan Leshui is clear, and the stone turtle looks up in the water, a kind of momentum that can be seen from afar and can't be ridiculed.

Walking along the mountain road to the Bu Zhoushan Grottoes, the trees are lush, blocking the sun outside, bringing all the way to shady. At Banbijiangshan, there are attractions such as Cangshui Pavilion, Liuxia Yinyu, Picking Stars and Moon, Banbi Hairi, Yunying Luoying and Qiushui Yingmei. In Cangshui Pavilion, you can stop and take a rest to enjoy the great mountains and rivers of the motherland. It is even more significant because this pavilion was built in honor of the anti-Qing hero Zhang Cangshui.

Jianmen Cave, the majestic wind of Jianmen, is magnificent; Hongyingtan is clear with water; the wall of the cave is magnificent. I am very glad to have come to the Wushan Grottoes. If I do n’t come, for those who love to travel, I will miss this worldly scene.

There are Shenfeng pond, magic rain pond, Longyin waterfall, Yuntai and Huilong cave in Shixie Longyin, each with the unique characteristics of Wushan Grottoes.

The scenic spots such as Shidatianjing and Qiongtai Wentian are also telling the traces of time left here, walking through them as if through time and space and talking with the ancients.